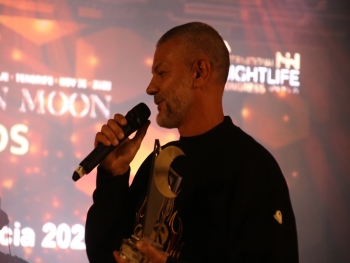 The Golden Moon Awards Gala also awarded other venues from Colombia, Spain, and Chile and concluded with the performance of DJ Roger Sanchez putting the final touch to the International Nightlife Congress

Hï Ibiza was proclaimed The World's Best Club 2022 last night in the Hard Rock Hotel in Tenerife, Spain, thus revalidating the highest global recognition given to a nightlife venue, which it had already obtained in 2019, the last year that the International Nightlife Association had published this prestigious list and that it has now been republished after the covid 19 pandemic. The award for The World's Best Club 2022 was awarded last night as part of the 7th Golden Moon Awards Gala and has been picked up by Yann Pissenem, CEO of The Night League, by the world-renowned DJ Roger Sánchez.

The second place is occupied by Omnia Las Vegas and the third position has been awarded to Ushuaïa Ibiza Beach Hotel in a list made up of a total of 100 venues from 34 different countries. Among them, Spain has been the country that has managed to place the most venues among the hundred best clubs on the list with 23 establishments, followed by the United States with 20 and in third place has been the United Kingdom, which has contributed 6 clubs. The complete list of "The World's 100 Best Clubs 2022" can be found on the website of the International Nightlife Association (www.nightlifeinternational.org).

Awards for sustainability, innovation and defense of nightlife entrepreneurs, clients and workers in the sector

On the other hand, the Golden Moon Award for the Best Collaborative Project in Defense of Nightlife has gone to the Italian Nightlife Association (SILB) for its work in defense of the sector and against binge drinking and illegal parties held during the pandemic, prize that its President Maurizio Pasca collected. On the other hand, Opium Barcelona has received the award for the Best Act of Excellence and Protection of Client and Worker Safety for the implementation of the Triple Excellence in Nightlife that incorporates measures to protect customer safety and worker health, award received by one of its owners, Javier Bordas.