Jamie Jones, the Blessed Madonna and more are djing at a 2,500-year-old fort in Ibiza 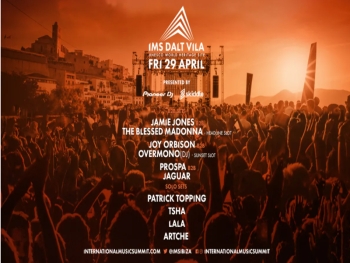 The event will close out the 13th edition of the International Music Summit.

A slew of renowned DJs are primed to breathe new life into a 2,500-year-old fort on the White Isle.

The organizers of the International Music Summit (IMS), one of the world's top electronic music conferences, have announced the return of their flagship IMS Dalt Vila event in Ibiza's famous Old Town. For seven hours, Jamie Jones, The Blessed Madonna and more will perform at the historic fort of Dalt Vila, which was officially named a World Heritage Listed Site by UNESCO in 1999.

Scheduled for April 29th in partnership with Pioneer DJ and Skiddle, IMS Dalt Vila will tie a bow on the summit's 13th edition while launching the summer season on the island. In early 2022, tourism officials confirmed a late April target date for the return of Ibiza's nightlife sector following a brutal string of postponements and cancellations contrived by the pandemic.

The return of IMS Dalt Vila features a stellar lineup of techno and house music lynchpins. The event will feature a triad of collaborative DJ sets from Jamie Jones and Madonna, Joy Orbison and Overmono, and Prospa and Jaguar. Artists set for solo performances include Patrick Topping, TSHA, LaLa, and Artche.