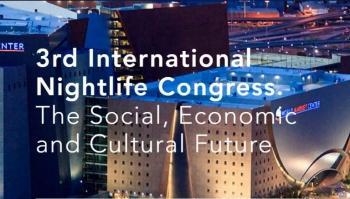 Delegates from Europe, America to Asia will attend the 3rd International Nightlife Congress at the World Market Center on October 26th in Las Vegas, NV, USA. We will convene the ​w​orld’s foremost thinkers, policymakers, developers, ​entrepreneurs and industry stars for a conversation on helping save and shape the nightlife industry of the future. “Join the movement of people who care about saving nightlife, by helping make nightlife safe! ​Help celebrate our mission to protect and support the positive social, economic, and cultural contributions of the nightlife industry” stated J.C. D​iaz, 1st Vi​ce President of the International Nightlife Association (INA).​

Our nightlife industry is ​under constant threat. From being soft targets for terrorism and increasing violence, blaming patron drug abuse on venues/ promoters, banning or placing moratoriums on EDM-related events, new housing built close to existing venues without soundproofing, strict licensing laws, and costly operating requirements – have all played a role in eroding our nightlife.
​
The first part of the congress will revolve around the Nightlife & Development of nightlife districts that attract people to keep going out. The discussion will be led by Jim Peters, President of the Responsible Hospitality Institute; Jocelyn Kane, Executive Director of the San Francisco Entertainment Commission; and Elizabeth Peterson of the Elizabeth Peterson Group. Maurizio Pa​sca, President of the European Nightlife Association and President of SILB (Italy); Paul Seres, Managing Member of the New York City Hospitality Alliance; Chris ‘Sarge’ Curtis, Founder of the Dow​ntown Rang​ers of Las Vegas DowntownProject.com, w​ill be taking part on Nightlife & Quality of Life.

The second block of talks will cover Nightlife & Entertainment and the influence of the music industry led by Sat Bisla, President of A&R Worldwide and MUSEXPO; Josh East, Founder of LeakySync. The panel on Nightlife & Tourism Marketing will be discussed by Barak Schurr, the Global Director of Dance & Nightlife at Eventbrite (Founder of Wantickets); Louie La Vella, the Author of ‘Nightclub & Bar Marketing’, and Producer of the Ever After Music Festival; and Andrew Gennuso, President of 420 Tours (medical cannabis experiences) in Las Vegas.

The Nightlife & Technology panel will have Amy Vanhook, Co-Founder of UrVenue; Benjamin Torres, of Hooch app; and Cindy Rothquel Dufau, the Business Development Manager at the on-line reservations platform NightSpender.

The panel on Nightlife & Responsibility will be addressing controversial topics with Stefanie Jones, Director of Audience Development at the Drug Policy Alliance; Kim Knight representig the Electronic Music Alliance, and CEO of Buddy.Systems; Emanuel Sferios, Founder, Dancesafe. Secretary, Amend The Rave Act. and Producer & Director, of MDMA The Movie.

The last session of talks will deal with the safety and security issues that are affecting the industry on an international level. The “International Nightlife Safety Seal” will be introduced by Joaquim Boadas, Secretary of the INA, as a solution to lower liability, risk and calls for service. This topic will be presented by Robert Smith, President of Nightclub Security Consultants; Doug Haines, Security Consultant representing the Security Industry Association; and United States Marshall of Nevada, Christopher Hoye.

“The International Nightlife Association tries to confront the principal problems of the sector to find entertainment places safer for everybody, without detracting the magnitude of this industry on the economy. The last year in Ibiza the congress was a success and we are sure that this year in Las Vegas we will surpass our expectations” said Abel Matutes Prats, President of the International Nightlife Association.

This year’s conference in Las Vegas will also include the announcement of the 2nd International Golden Moon Awards winners. The aim is to become an International Nightlife Awards benchmark chosen by a panel of industry professionals. We will be presenting the “100 Best Clubs” in the world and the “Best Club in the World” right after the International Nightlife Congress. An after-party will follow.

Complete program of the events