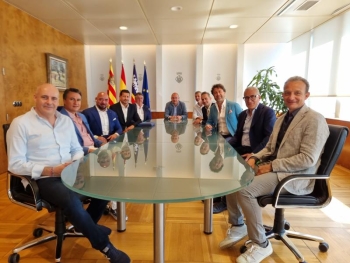 The meeting was held by representatives of the industry from Spain, Italy, and Colombia, and topics related to safety, quality and excellence were discussed

On the other hand, President Vicent Marí and Director of Tourism Juan Miguel Costa attended on behalf of the Government of Ibiza, the hosts of the meeting. Within the framework of the meeting, collaborations were put forward between the different territories with trips and visits included to exchange ideas and projects to continue promoting safety, quality and excellence in nightlife and, consequently, continue to attract tourists from all over the world.

The President of Ibiza gave its full support to the main distinctions promoted by the INA, such as now the Triple Excellence in Nightlife which promotes safety, quality and excellence in nightlife, as well as the GastroMoon, which unites quality nightlife with haute cuisine and is promoted by the INA together with the World Association of Chefs’ Societies. President of Ibiza stated that "Everything that involves promoting safety and quality in nightlife will have our support and backing, as this not only means improving the services and image of Ibiza’s venues that implement it in this way as well as for its clients and workers, but it is also a benefit for the Ibiza brand".

On his behalf, Joaquim Boadas, General Secretary of the INA and Spain Nightlife, thanked the Island’s President for his support and stated that "Our main objective is to dignify the nightlife sector and we are doing so by promoting international safety and quality that contributes to the protection and comfort of our clients and workers". The nightlife employer representative wanted to recall the last requirement that the organization is demanding to obtain the International Nightlife Safety Checked (INSC), which is to "Have drink protectors available to those who wish to avoid cases of drink spiking and that is added to the protocol already implemented to avoid cases of sexual assault that goes by the name "Ask for Angela" among other security measures".

Precisely right now in Ibiza, three venues are renewing the Triple Excellence in Nightlife and they are Ushuaïa Ibiza Beach Hotel, Hï Ibiza and DC-10, while other venues have shown interest in being the first in the Balearic Islands to get hold of a GastroMoon.